With the first month down, we at Archadeck Outdoor Living are happy to announce the first two finalists for Archadeck’s Dream Backyard Makeover. We had just under 350 entries in the month of February, making it extremely tough to pick just two deserving families.

If you haven’t entered the contest yet, make sure you do at DreamBackyardMakeover.com. Two finalists are chosen for the months of February, March and April. On April 23rd the photo descriptions and photos will be posted for online voting. The winner of the $70,000 makeover will be chosen as a result of panelist votes and Facebook votes. TimberTech Decking and Belgard hardscapes will be used in the final project.

Here are the two finalists for February (full owner descriptions will be posted when voting begins on April 23rd). 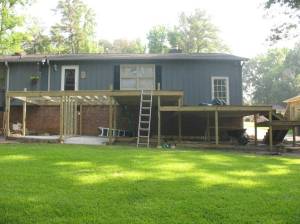 The first is out of South Carolina where the homeowners were unfortunately taken advantage of by a lousy contractor. They hired and paid a contractor to build a new deck off the back of their house only to have the contractor disappear in the middle of the project. To make matters worse, the homeowners found out that none of the work was done to code leaving an unsafe structure!

The second finalist comes from the Chicago area. The homeowners purchased this house only 3 days after welcoming their first child. They hope to raise their family in this house, but it needs some work. They plan to host friends, family and neighbors in the backyard of their dreams if chosen for the backyard makeover.

Congrats to our two finalists!

Visit our web site for pictures, information, and to submit a request for a free consultation.

Want to learn more about investing in an Archadeck franchise? Visit our Franchise Recruitment Website

Visit our Archadeck web site or email us